I’m back today with a feature that I had on my old blog which proved pretty popular – The £20 Primark Challenge! The idea is that each month I pick a theme, which I then have to put together an outfit for £20 or under from (you’ll never guess…) Primark. Last week I went on holiday to Portugal with my family, so a comfy outfit for travelling seemed like the perfect idea!

I had a bit of an idea of the sort of thing I was looking for. Our flight wasn’t until the evening so I wanted to make sure that I didn’t get chilly (not a chance, it was still boiling when we landed!) so I knew I would be looking for layers as opposed to just a jumper. The only other thing I’d really decided on was a long sleeveless cardigan. I had an idea in my head but hadn’t actually seen one I liked, but I wanted something long that would cover my bum and hide a multitude of sins. It may just be the airport, but I was on my holidays and still wanted to make an effort!

As soon as I saw this cardigan I knew it was the one. Although the crochet (??) type design might make it look like it would be pretty cold it was actually really cosy, and the tassles give it more of a pretty feeling. It was an absolute steal at only £12 as well, as I know I will wear it lots more throughout autumn. However, I had blown half my budget!

I wanted to keep the rest of the outfit simple, and decided on a long sleeve top to give me some extra warmth on the plane, but I would also be able to roll them up if I were too hot when I landed in Faro. I love this navy and white striped one, it’s such a classic and something else I would get plenty of use out of. At £6.00 it was another bargain, but that only left me with £2.00 for something to go on my bottom half!

Luckily I found some leggins that were reduced to £2.50 and they claimed to be a new improved design, so I was optimistic that they would be better than ones I have got from there in the past. They weren’t too bad, but I think I would have been better with a smaller size as they became stretchy very quickly.

Overall, I don’t think I did too badly as I only failed by 50p! Here’s the final outfit… 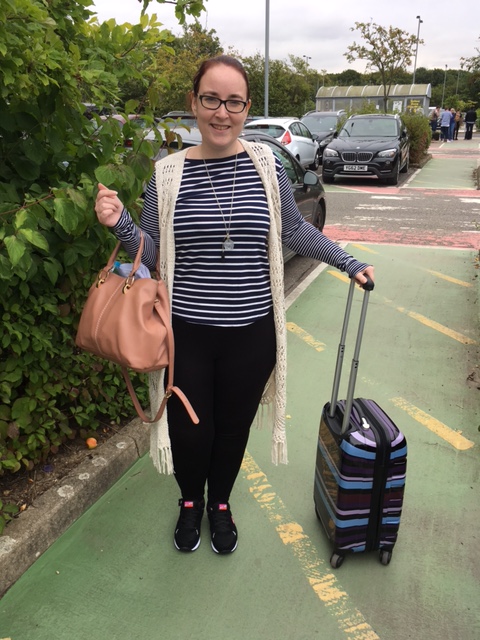 I added a few extra bits to complete the outfit too, the necklace I was wearing was a cheapy one that I got on eBay for about £1 ages ago, and my handbag was from Next last September, it’s very well travelled as you can fit so much in it! My trainers were actually also new and are by Sketchers, see below for a close up, and you can find them here.

How do you think I did? I would love to know if you have any idea’s or themes for future challenges!

The lovey @makeup_kirsty is having a giveaway over on her page! She’s my go to for recommendations on sweet treats, but also great work outs so I don’t gave to feel guilty eating them!
Been stressed to the max lately, but today I went to Colchester Zoo for the first time with my annual pass and it was just the therapy I needed!
Every. Damn. Week. 🙈
😢 #RIPKobeBryant
PSA These are the most amazing things of life!
Three years since you got your wings. My heart is heavy today, god I miss her. Love you mum ❤️